Courbet’s paintings of the late 1840s and early 1850s gained him recognition and, later, controversy. They challenged convention by depicting the rural bourgeoisie, peasants living in poverty and other working-class people, and were often large scale pieces traditionally reserved for paintings with religious or historical themes. His work became known as Realism.

Young Ladies on the Banks of the Seine, painted in 1856, was the subject of much debate. Art critics accustomed to conventional nudes in landscapes were shocked by this new and ‘scandalous’ depiction of modern women casually displaying their undergarments.

An active socialist, Courbet was interested in the political developments of France at the time. In 1871, he was imprisoned for his involvement with the Paris Commune, and lived in exile in Switzerland from 1873 until his death. 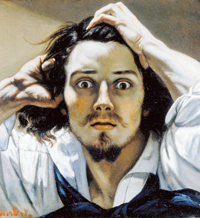