About the artist: Leonardo da Vinci (1452 – 1519) was an Italian artist and polymath of the Renaissance period. His interests included not only drawing and painting, but invention, architecture, science, history, music and mathematics. He has been called the father of palaeontology, ichnology and architecture and is considered by many as one of the greatest painters of all time. He has also been credited with the inventions of the parachute, helicopter and tank.

While there is speculation regarding Da Vinci’s life, personality and family, the majority of his artworks remain. His view of the world was logical although unorthodox for the time period.

Da Vinci is best-known for his portrait, The Mona Lisa. It has been described as ‘the best known, the most visited, the most written about, the most sung about, the most parodied work of art in the world’. It is also one of the most expensive, reaching the highest known insurance valuation in history at $100 million in 1962. It is currently on display at the Louvre museum in Paris.

Da Vinci died at the age of 67 from a stroke. He was buried in the Chapel of Saint-Hubert in Château d’Amboise in France. 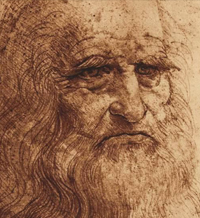