Born into a French, upper-class household with strong political connections, Manet rejected the future originally envisioned for him and absorbed himself in painting.

Two of his early works, The Luncheon on the Grass and Olympia, both 1863, were the subject of critical debate and served as rallying points for the future Impressionists. Manet’s paintings of café scenes are accurate observations of social life in 19th-century Paris. Many were based on sketches executed on the spot, then painted in a loose, expressive style, reflective of Parisian night life.

He is also famous for his scenes of war. The first of these works was the Battle of the Kearsarge and Alabama (1864), which took place off the French coast and might have been witnessed by the artist.

In 1883, Manet’s left foot was amputated because of gangrene. He died eleven days later in Paris. He is buried in the Passy Cemetery in the city. 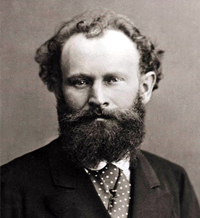