About the artist: Peter Paul Rubens (1577 – 1640) was a Flemish artist and considered by many as the most inspiring artist of Flemish Baroque tradition. His unique and highly expressive Baroque-style paintings covey movement, colour, sensuality and detail. His earlier drawings are more forceful with less detail. He was one of the last major artists to consistently use wooden panels, even for very large works, but he used canvas as well, especially when the work needed to be sent overseas.

Throughout his life, Rubens specialised in making altarpieces, portraits, landscapes and history paintings of mythological beings. Alongside running a large studio in Antwerp, Rubens was an educated humanist scholar and dedicated much of his time to study. For this, he was knighted by both Philip IV of Spain and Charles I of England.

Rubens particularly enjoyed painting portraits, especially of friends and self-portraits. It wasn’t until later life that he turned his attention to landscapes. He also designed his own house, and the decorations of for the royal entry into Antwerp by the Cardinal-Infante Ferdinand of Austria, in 1635.

Rubens’ second wife Hélène inspired the voluptuous figures in many of his paintings from the 1630s, including The Feast of Venus. He died from heart failure in 1640. 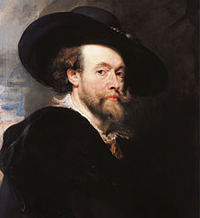