About the artist: Caspar David Friedrich (1774 – 1840) was a 19th-century German Romantic landscape painter. He is now considered the most important German artist of his generation. He is best-known for his mid-period allegorical landscapes often featuring melancholy figures silhouetted against night skies, morning mists, barren trees or sinister, Gothic ruins.

Friedrich was born in the town of Greifswald on the Baltic Sea in what was at the time Swedish Pomerania. He had an early interest in the outdoors and responded emotionally to the natural world.

Friedrich’s work brought him critical acclaim early in his career. The French sculptor David d'Angers spoke of him as a man who had discovered ‘the tragedy of landscape’. However, during later years, his work fell from favour and he died in obscurity. As Germany moved towards modernisation in the late 19th century, Friedrich’s contemplative figures in their still and eerie landscapes came to be seen as the products of a bygone age. By the 1920s, his paintings had been discovered by the Expressionists and, soon after, the Surrealists and Existentialists began drawing ideas from his work. Only the Nazis disapproved of his paintings, believing they had a nationalistic aspect.

Friedrich is responsible for the quote, ‘The artist should paint not only what he sees before him, but also what he sees within him. If, however, he sees nothing within him, then he should also refrain from painting that which he sees before him. Otherwise, his pictures will be like those folding screens behind which one expects to find only the sick or the dead.’ 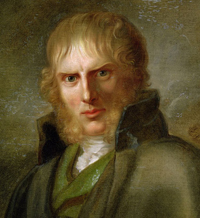