About the artist: Abbott Handerson Thayer (1849 – 1921) was an American artist, naturalist and teacher. As a painter of portraits, figures, animals and landscapes, he enjoyed wealth and success during his life. He is best-known for his ‘angel’ paintings, some of which use his children as models. Thayer also influenced American art through his efforts as a teacher, training apprentices in his New Hampshire studio.

In later life, he worked with his son, Gerald Handerson Thayer, to write a book about protective coloration in nature called Concealing-Coloration in the Animal Kingdom. It is thought to have had an effect on military camouflage during World War I.

Thayer suffered from a condition that is now known as bipolar disorder. As he aged, he suffered increasingly from panic attacks (which he called ‘fright-fits’), nervous exhaustion and suicidal thoughts. He continued to paint but had to stop for weeks at a time due to nervous exhaustion. In an effort to avert suicidal thoughts, he sought help at a sanatorium in Wellesley, Massachusetts.

Thayer died in 1921. His paintings are represented in many major American art collections. 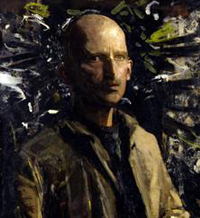