About the artist: Willem van de Velde the Younger (baptised December 1633, died 1707) was a Dutch marine painter. He was taught by his father, also a marine painter.

In 1673, van de Velde moved to England, where he was engaged by Charles II at a salary of £100, to aid his father in ‘taking and making draughts of sea-fights’. His job was to reproduce in colour the drawings his father had previously made.

Throughout his life, he was patronised by the Duke of York and other various members of the nobility.

Most of Van de Velde’s paintings depict views off the coast of Holland, with Dutch ships. Numerous figures appear subtly his paintings, and the artist is successful in his renderings of sea, whether in calm or storm. The ships are portrayed with almost photographic accuracy.

He died in 1707 and was buried at St James’s Church, Piccadilly. A memorial to him and his father can be found inside the church. 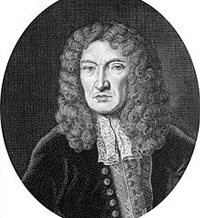