About the artist: Tiziano Vecelli, known in English as Titian (1488/1490 – 1576), was an Italian painter and a member of the 16th-century Venetian school. He was also referred to as da Cadore, taken from the place of his birth. His career was successful from the start, and he became sought after by patrons, initially from Venice and the surrounding areas, then joined by the north Italian princes.

At the age of about ten, he and his brother Francesco were sent to an uncle in Venice to find an apprenticeship with a painter. The minor painter Sebastian Zuccato arranged for the brothers to enter a studio where Titian learned to develop his style.

During a visit to Rome, Titian began a series of reclining Venuses: The Venus of Urbino of the Uffizi, Venus and Love, Venus and the Organ-Player and more. The meaning of the scenes, highlighted by the harmonious colouring, was praised by art critics.

In later life, Titian worked mainly for Philip II and as a portrait-painter. A victim of a plague-ridden Venice, he died of a fever in 1576.

Titian’s techniques, particularly in the application of colour, would inspire not only painters of the late Italian Renaissance, but future generations of Western art. Along with Giorgione, he is considered a founder of the Venetian School of Italian Renaissance painting. Throughout his long life, Titian’s artistic style altered and evolved, although he retained a lifelong interest in colour. 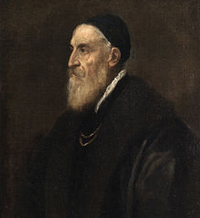