About the artist: Paul Gauguin (1848 – 1903) was a French post-Impressionist artist. Unappreciated until after his death, Gauguin is now regarded as one of the best post-Impressionist artists of the time. He has been praised for his experimental use of colour and Synthetist style that were distinctly different from Impressionism. His work inspired many modern artists such as Pablo Picasso and Henri Matisse.

Gauguin’s birth coincided with revolutionary upheavals throughout Europe that year. He grew up in Paris and in 1873, he began painting in his free time.

Under the influence of folk art and Japanese prints, Gauguin’s work evolved towards Cloisonnism. The Yellow Christ (1889) is often cited as a quintessential Cloisonnist artwork. Here, the image was reduced to areas of pure colour separated by heavy black outlines. In early works such as these, Gauguin paid little attention to classical perspective and eliminated subtle gradations of colour. His style later moved towards Synthetism.

Some of Gauguin’s paintings were seen and admired by Vincent van Gogh and his brother Theo, an art dealer. Theo bought three of Gauguin’s paintings for 900 francs and arranged to have them displayed, introducing Gauguin to wealthy clients. He and van Gogh became friends and spent nine weeks painting together at van Gogh’s home in Arles. In December 1888, according to a much later account of Gauguin's, van Gogh confronted Gauguin with a razor blade. Later that evening, van Gogh cut off his left ear. He was hospitalized the next day and Gauguin left Arles. They never saw each other again.

Toward the end of his life, Gauguin spent ten years in French Polynesia. Most of his later paintings from this time depict people or landscapes from the region. His art became more popular after his death, partially from the efforts of art dealer Ambroise Vollard, who organised exhibitions of his work. 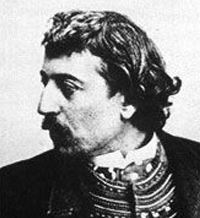