About the artist: Michelangelo (1475 – 1564) was an Italian sculptor, painter, architect and poet of the High Renaissance. He exerted an unparalleled influence on the development of Western art and was considered by many as the greatest artist of his lifetime. A number of Michelangelo’s works rank among the most famous and influential in existence. He worked hard throughout his long lifetime, producing numerous works, thus making him the best-documented artist of the 16th century. Despite his indifference to painting, he created two of the most famous and influential in the history of Western art: the scenes from Genesis on the ceiling of the Sistine Chapel in Rome, and The Last Judgment on its altar wall.

Michelangelo was born in Caprese, known today as Caprese Michelangelo, a small town near Tuscany, Italy. He was raised in Florence, where he developed a love for marble sculpting. The Statue of David, later completed in 1504, is one of the most renowned works of the Renaissance.

In 1505, Michelangelo was invited to Rome by the newly elected Pope Julius II and commissioned to build the Pope’s tomb. He was under strict instruction to include forty statues and to finish the project within four years. During the same period, he painted the ceiling of the Sistine Chapel, which also took four years to complete.

After this, Michelangelo was bombarded with proposals to build various sculptures around Italy, and in 1546, he was appointed architect of St. Peter’s Basilica in Rome. The process of replacing the Constantinian basilica of the 4th century had been underway for fifty years, although little progress had been made. Michelangelo was persuaded to take over the project. He developed plans for a centrally planned church, but died before its completion.

Michelangelo was a devout Catholic whose faith strengthened towards the end of his life.

He was the first Western artist whose biography was published while he was alive. In fact, two biographies were published during his lifetime. One of them, by Giorgio Vasari, proposed that Michelangelo’s work was the best of any artist, living or dead, and was ‘supreme in not one art alone but in all three’. 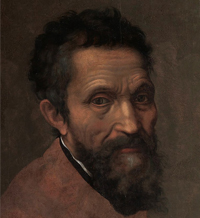