About the artist: Kazimir Malevich (1879 – 1935) was a Russian avant-garde artist. His work had a profound influence on modern art in the 20th century.

From an early age, Malevich sought to develop a form of expression that moved as far as possible from the world of natural forms in order to access ‘the supremacy of pure feeling’ and his own spiritual beliefs.

In the early years of his artistic career, Malevich worked in a variety of styles, mainly Impressionism, Symbolism and Fauvism. After a visit to Paris in 1912, he tried his hand at Cubism. Throughout his life, he simplified his style and developed an approach with geometric forms and their relationships to one another, set against minimal grounds.

Black Square (1915), a black square on a white background, is regarded by many as the most abstract painting ever created. Suprematist Composition: White on White (1918), a barely differentiated off-white square superimposed on an off-white ground, received similar acclaim and controversy.

When Malevich died in 1935 at the young age of fifty-seven, his friends and followers buried his ashes in a grave marked with a black square, representative of his 1915 painting. 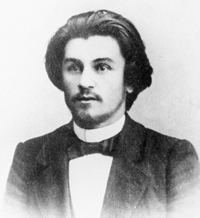