About the artist: John Godward (1861 – 1922) was an English painter from the end of the Neo-Classicist era. His work is essentially without narrative or dramatic charge, but shows the artist’s supreme talent for rendering textures and fabrics and the arrangement of beautiful forms to create an aesthetic ensemble.

Godward’s overbearing parents did not want him to pursue a career in art, but he ignored them. His paintings quickly became popular when he exhibited at the Royal Academy in 1887. When he moved to Italy with one of his models in 1912, his parents broke off all contact with him and even cut his image from family pictures.

One of his best-known paintings, Dolce far Niente (1904), was purchased for the collection of Andrew Lloyd Webber in 1995.

Godward’s use of beautiful models in romantic settings and vibrant colour palette still cause many people to mistake him for a Pre-Raphaelite artist, however, it is appropriate to comment that he was a ‘High Victorian Dreamer’, producing delicate and highly idealistic images of the world.

Sadly, Godward’s style of painting later fell out of favour with the rise of modern art and he committed suicide at the age of 61. In his suicide note, he wrote, ‘the world is not big enough for both myself and a Picasso’. His estranged family was ashamed of his suicide and burned his papers. Only one photograph of Godward survived. He is buried in Brompton Cemetery in west London. 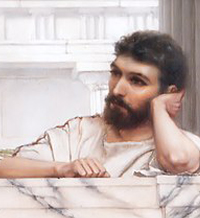