About the artist: John Singer Sargent (1856 – 1925) was an American expatriate artist famous for his portraits of Edwardian-era luxury. Throughout his life, he painted approximately 900 oil paintings and more than 2,000 watercolours, as well as numerous sketches and charcoal drawings. He travelled all over the world and trained as an artist in Paris.

His first major portrait was of his friend Fanny Watts, in 1877. From then on, He enjoyed international acclaim as a portrait painter but was also the subject of some controversy. An early submission to the Paris Salon, his Portrait of Madame X, resulted in scandal when the figure was considered too seductive. It is now heralded as one of his best works.

By 1900, Sargent was at the height of his fame. In this time, he produced dozens of oil paintings and portrait drawings, selling at about $400 each.

In later life, he devoted all of his energy to mural painting and working en plein air, inspired by his early love for landscape art.

Sargent was a lifelong bachelor with many friends, including the artists Degas, Rodin, Monet, and Whistler. Scholars have suggested he was a private, complex and passionate man with a homosexual identity that helped shape his art.

His work is characterised by remarkable attention to detail and the ability to draw with a brush, which gained him both popularity and criticism for being too superficial. His commissioned works were consistent with the grand manner of portraiture, while his informal studies and landscape paintings had a more Impressionist look about them. 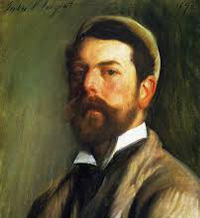