About the artist: Sir James Jebusa Shannon (1862 – 1923) was an Anglo-American artist whose fluid use of shape and colour continues to inspire portrait artists around the world today.

Shannon was born in New York, but was taken by his parents to Canada at a young age. When he was sixteen, he travelled to England, where he studied in South Kensington and later won the gold medal for figure painting.

His portrait of the Hon. Horatia Stopford, one of the Queen’s maids of honour, attracted attention at the Royal Academy in 1881. A few years later, his portrait of Henry Vigne in his hunting costume was a huge success, subsequently securing medals for Shannon in Paris, Berlin and Vienna. Since then, Shannon was known as one of the leading portrait painters in London.

Shannon’s painting, The Flower Girl, was bought for the national collection at Tate in 1901. He has other works across galleries in the Derby Art Gallery, the Glasgow Museum and the Bradford Museum.

A memorial to the artist can be found in St James’s Church, Piccadilly. 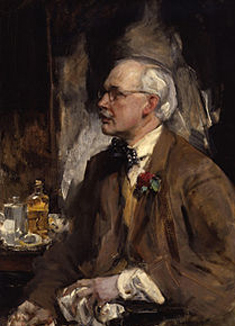