About the artist: Frank Duveneck (1848 – 1919) was an American portrait artist. Born in Covington, Kentucky, he was the son of German immigrant Bernhard Decker.

Due to his Catholic beliefs and German heritage, he was an outsider in the art community at the time. So in 1869, he travelled abroad to study art at the Royal Academy of Munich where he learned a dark, realistic and direct style of painting.

Henry James called Duveneck ‘the unsuspected genius’ and by the age of 27 he was a celebrated artist. In 1878, he opened two schools: one in Munich and one in the village of Polling in Bavaria. His students were known as the ‘Duveneck Boys’. In 1905, he was elected into the National Academy of Design as an Associate member, and became a full Academician in 1906.

Among Duveneck’s most famous paintings are Lady with Fan (1873) and The Whistling Boy (1872), both of which reveal his love of dark colours and ‘slashing’ brushwork.

His work is currently on display in several major galleries across America.

Duveneck died in 1919 and was buried at the Mother of God Cemetery in Covington. 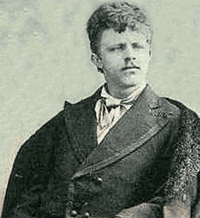