William Bougereau is regarded as one of the greatest portraitists of all time. Despite personal hardships, his dedication to his craft remained strong throughout his lifetime.

About the artist: William Bouguereau (1825 – 1905) was a French painter. His works are mainly of mythological scenes, making modern interpretations of classical subjects, with an emphasis on the female form. During his life, Bougereau enjoyed significant wealth and fame in France and the United States, was given several honours and received high prices for his work. Sadly though, by the early twentieth century, Bouguereau received criticism from the public due to changing tastes. Bouguereau executed 822 known finished paintings, although the whereabouts of many are still unknown.

He was a studious artist, often completing twenty or more easel paintings in a single year. Even during his later life, he would get up at dawn to work on his paintings six days a week and continue working until nightfall. He once quoted, ‘Each day I go to my studio full of joy; in the evening when obliged to stop because of darkness I can scarcely wait for the next morning to come. If I cannot give myself to my dear painting I am miserable.’

Bougereau had a troubled personal life and lost a wife and several children to illness. In 1905, he died in La Rochelle at the age of 79 from heart disease. There was an outpouring of grief in the town of his birth. 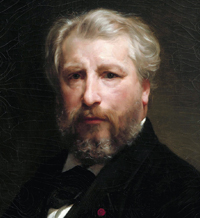