About the artist: As a boy in the 60’s, Tim Bulmer was sent away to school at Bramcote in Scarborough followed by five years at what was then the tough, no nonsense, rugby obsessed Sedbergh School in the old West Riding. Art college at Wimbledon was a joy after having spent most of his school career at the bottom of a loose ruck and his determination to make it in the art world never wavered from that point on. His first proper job (after tinkering about back stage in the theatre) was as picture framer come gallery sales assistant at Forest Galleries in Guildford, he was a nifty framer but not so hot on the sales until encouraged to sell his own work. He was soon noticed by De Montfort Fine Art, one of the two major fine art distribution companies who went on to market his watercolours and etchings to an ever increasing band of admirers both at home and abroad. However, after fourteen years, Tim decided he’d like to try something different and with that in mind moved back north to Pickering and diversified.

Whatever the subject matter - be it a panoramic street scene, a lady trimming a large hedge, a vintage car struggling up a mountain pass or a geriatric rugby player - there is always that unmistakable Bulmer squint at life which simply refuses to take things too seriously. His private and commercial commissions, the giclée gallery and more recently the merchandising have all taken on a life of their own as they find a place in the lives of people from every corner of the globe and of every conceivable ilk. He takes nothing too seriously which is just as well in a world sometimes bereft of the light-hearted - more power to his pen!

Tim has also designed wine labels for Fitou and promotional prints for Taylor’s Port. He has undertaken both personal and commercial commissions including restaurants, hotels and gastro pubs such as The Star Inn At Harome and the Pipe & Glass at South Dalton, whilst illustrating books for authors such as Roger Steare and Ray Mears. 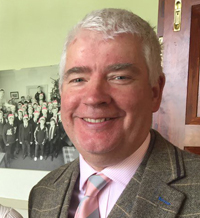