Tamara de Łempicka made bold, liberated female sexuality the linchpin of her art, and is highly praised for it to this day.

About the artist: Tamara de Łempicka (1898 – 1980) was a Polish painter, best-known for her highly stylised paintings of nude women. She was the only easel painter in the entirety of the Art Deco style. Her sources of inspiration ranged dramatically, from Italian Renaissance painting to avant garde art and cubism. Łempicka used her social connections to create a niche for her portraiture, most of which featured well-to-do, cosmopolitan subjects. She made bold, liberated female sexuality the linchpin of her art, and is still praised for it today.

Łempicka was a bisexual and flaunted her sexual freedom throughout her lifetime, making her something of a conundrum for feminist art historians. She frequently depicted her female lovers and other women – often in pairs or groups – as relishing in their sexuality under the gaze of a female painter. It is thought that, as a member of the upper class, Łempicka’s freedom was more easily attained and forgiven at the time. 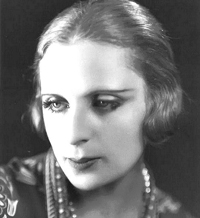