One of the key figures of Impressionism, Renoir eventually left the movement to pursue more personal, academic painting.

About the artist: Pierre-August Renoir (1841 – 1919) was a French artist and a leading painter in the development of the Impressionist style. A conveyer of natural beauty and feminine sensuality, it has been said that ‘Renoir is the final representative of a tradition which runs directly from Rubens to Watteau’. He was the father of actor Pierre Renoir and filmmaker Jean Renoir, and produced several thousand works during his lifetime.

Renoir was inspired by the style and subject matter of previous modern painters Camille Pissarro and Edouard Manet. His paintings are well-known for their vivid light and rich colour palette, and mainly focus on people in intimate and candid situations. His figures were painted freely and delicately to ensure that they fused with one another and their surroundings.

After 1890, Rubens changed direction, concentrating on nudes and domestic scenes, a fine example of which is Girls at the Piano, 1892. 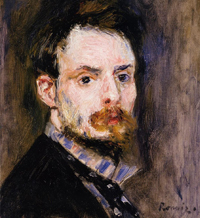