Cézanne’s work helped to guide transition from the 19th-century conception of artistic endeavour into a new and exciting world of art in the 20th century. Both Matisse and Picasso are said to have remarked that Cézanne ‘is the father of us all’.

About the artist: Paul Cézanne (1839 – 1906) was a French artist and Post-Impressionist painter. His works were rejected by galleries and ridiculed by art critics when exhibited alongside the Impressionists. However, during his lifetime, Cézanne was deeply admired by younger artists who visited his studio in Aix, and is now considered responsible for forming the bridge between late 19th-century Impressionism and the early 20th century’s new artistic style, Cubism.

Along with the work of Vincent van Gogh and Paul Gauguin, the work of Cézanne, with its sense of immediacy and incompletion, heavily influenced the artist Matisse. His explorations of geometric simplification and optical phenomena also inspired Picasso. Cézanne’s repetitive, expressive brushstrokes are highly characteristic and convey the intense study of his subjects.

Cézanne was caught in a storm while working in a field. After working for two hours he decided to leave, but on the way he collapsed and was taken home by a passing driver. He died a few days later of pneumonia and was buried in his hometown of Aix-en-Provence. 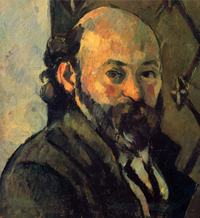