About the artist: John Collier (1850 – 1934) was a highly influential English artist and author. He painted in the Pre-Raphaelite style with a focus on attention to detail. His paintings mainly feature women in grand surroundings, but he is most famously known for painting Charles Darwin. The portrait sees him facing the observer in the loose cloak familiar to those who knew him, and with his beloved slouch hat in his hand.

Collier’s range of portrait subjects was broad. His commissioned portraits of the Duke of York (later George V) as Master of Trinity House in 1901, and the Prince of Wales (later Edward VIII) were his major royal portraits.

Collier had an interesting perception of religion for his time. He quoted, ‘The Bible is mostly concerned with ethics apart from religion... I am looking forward to a time when ethics will have taken the place of religion... My religion is really negative. [The benefits of religion] can be attained by other means which are less conducive to strife and which put less strain on upon the reasoning faculties.’

Collier’s entry in the Dictionary of National Biography compares his work to that of Frank Holl, due to its stillness and solemnity. 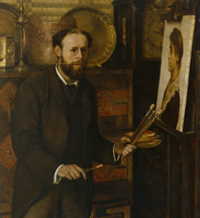