John Atkinson Grimshaw’s atmospheric landscapes reflect the true – and sometimes depressing – nature of the town or city at the time. He provides us with a raw insight into the Victorian era.

About the artist: John Atkinson Grimshaw (1836 – 1893) was an English Victorian-era artist, best-known for his nocturnal urban landscapes. Today, he is considered one of the most renowned painters of the Victorian era, as well as one of the most accomplished nightscape and townscape artists of all time.

Grimshaw was heavily influenced by the Pre-Raphaelites and, true to the Pre-Raphaelite style, he created landscapes of accurate colour and lighting, vivid detail and realism. His attention to detail and his skill in lighting effects ensured that he captured both the appearance and the mood of a scene. Grimshaw’s drive for realism was criticised by some contemporaries, however he mostly received praise for his masterful technique comparable to no other artist. His favourite place to paint was Scarborough, and it was here he eventually bought a second home with his wife and children.

Grimshaw died of tuberculosis and is buried in Leeds. Several of his children went on to become successful painters. 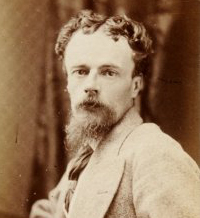