Ilona Drew graduated with a BA (Hons) in Surface Pattern and went on to design an award-winning, colourfully illustrated range of products.

About the artist: Born to a mother and father who were artists and with a surname like Drew, it seems it was Ilona’s destiny to be creative. After attending art college, completing a BA (Hons) in Surface Pattern & MA in textiles focusing on computer aided design, Ilona began her creative career at a greeting card publishers, designing cards for the high street.

A move to a publishers on the south coast relocated Ilona to Brighton and in 2009, she went freelance and began working under the name of I Drew This.

Working with mixed media, her pieces evolve often beginning with just one block of colour. When creating she is always accompanied by music and it is important her pieces have depth, originality and carry the viewer's eye. Her ranges have a strong connection with her life inspired by her surroundings (Ilona lives and works in Brighton), her daughter or personal elements of her life to date. A defining moment in her life so far was being awarded Best Art in the 2016 industry awards The Henries.

Ilona has worked with a number of larger publishers including Camden Graphics, Paper Rose, Uk Greetings and sold textiles designs in the UK and US. 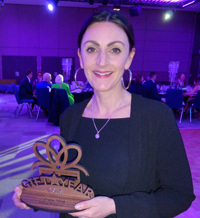