Another ‘died too young’ artist, Shiele’s strong and ruthless portraits influenced the works of artists Lucian Freud and Francis Bacon.

About the artist: Egon Schiele (1890 – 1918) was an Austrian painter. A protégé of Gustav Klimt, Schiele was a highly influential figurative painter of the early 20th century. His work is noted for its intensity and its raw sexuality and included nude self-portraits. The twisted body shapes and distinctive lines characterising Schiele’s paintings and drawings mark the artist as an early exponent of Expressionism.

Although Schiele avoided conscription for almost a year, World War I heavily influenced his life and work.

Schiele was the subject of the biographical film, Excess and Punishment, exploring his artistic demons leading up to his death at only 28 years old. 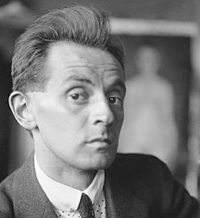