German Expressionist painter August Macke was a follower of the avant-garde movement. His works focus on expressing feelings and moods rather than reproducing objective reality.

About the artist: August Macke (1887 – 1914) lived during a particularly innovative time for German art; he witnessed the development of the main German Expressionist movements as well as the arrival of the successive avant-garde movements which were rapidly forming throughout Europe. Like a true artist of his time, Macke incorporated elements of the avant-garde in his paintings. They primarily focus on expressing feelings and moods rather than reproducing objective reality, through the distortion of colour and form.

Macke spent most of his creative life in Bonn, with the exception of a few periods spent at Lake Thun in Switzerland and various trips to Paris. It was here in Paris where Macke saw the work of the Impressionists, and shortly after he went to Berlin and spent a few months in Lovis Corinth’s studio. His style was formed within the mode of French Impressionism and Post-impressionism and later went through a Fauve period. The exotic atmosphere of Tunisia, where Macke traveled in April 1914, was crucial for the creation of the luminist approach of his final creative period, during which he produced a series of works now considered masterpieces.

His career was cut short by his death during the First World War, in 1914. His final painting, Farewell, depicts the mood of gloom that settled after the outbreak of war. In the same year, he painted the famous Türkisches Café in München. 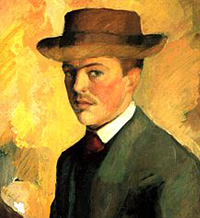