Dürer’s watercolours mark him as one of the first European landscape artists, while his ambitious woodcuts revolutionised the potential of that medium.

About the artist: Albrecht Dürer (1471 – 1528) was a painter, printmaker and theorist of the German Renaissance. He gained popularity when he was still in his twenties for his detailed woodcut prints and is one of the most highly acclaimed engravers to date.

Throughout his lifetime, Dürer was in communication with the major Italian artists of that period, including Raphael, Giovanni Bellini and Leonardo da Vinci. From 1512, he was commemorated by both the Lutheran and Episcopal Churches. The Expulsion From Paradise, a vast body of work created in 1510, includes engravings, altarpieces, portraits and self-portraits, watercolours and books. The woodcuts, such as the Apocalypse series (1498), are much darker in theme than the rest of his pieces.

Dürer’s most famous engravings include Knight, Death, and the Devil (1513), Saint Jerome in his Study (1514) and Melencolia I (1514), which has been the subject of extensive debate and interpretation.

His introduction of classical motifs into Northern art, through his knowledge of Italian artists and German humanists, secured his reputation as one of the most important figures of the Northern Renaissance. His religious works are considered some of the most detailed and poignant to date.

Dürer died in Nuremberg at the age of 56, leaving an estate valued at 6,874 florins – a considerable sum back then. He is remembered for the quote, ‘If a man devotes himself to art, much evil is avoided that happens otherwise if one is idle’. 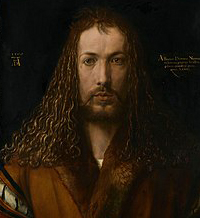